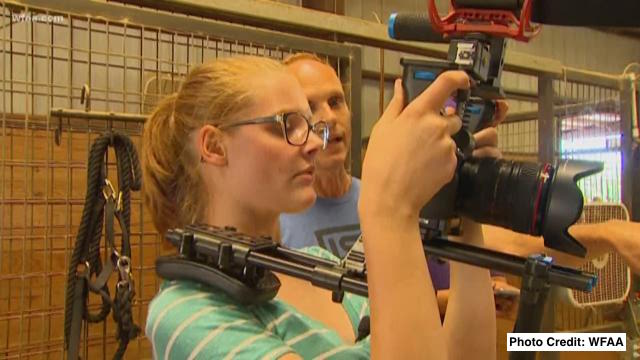 MPS Studios is honored to sponsor the first-ever Cowgirls with Cameras film camp. The camp, which takes place on Thursday, June 14, and Friday, June 15, is a film experience during which girls in high school, ages 14-18, gain exposure to filmmaking by shooting a documentary short film alongside local industry professionals.

Applicants were to write an essay describing their interest in attending the camp, and six of the highest-qualified candidates were chosen. The girls get to learn from nine film industry volunteers, meaning they will have lots of one-to-one mentorship opportunities.

The National Cowgirl Museum and Hall of Fame and the Lone Star Film Society came together initially to make the camp happen.

“The Museum had recently honored Callie Khouri, the writer of ‘Thelma and Louise’ and the series ‘Nashville’, who noted that not many women have jobs behind the camera; opportunities for women and girls to learn are few,” said Diana Vela, Associate Executive Director of Exhibitions and Education at the Cowgirl Museum. “Knowing that Lone Star Film Society was right in our backyard, we wanted to take advantage of their expertise and offer an opportunity for young girls to learn about what happens behind the camera.”

The Cowgirl Museum reached out to the Lone Star Film Society, and the partnership was born. They began putting their heads together to build an education program that involved documentary filmmaking for their participants.

The collaboration grew even further when Chad Mathews, Festival and Film Society Director for LSFS, enlisted the help of Four Thirds Creative – a woman-owned production company focused on creating videos with social and emotional impact.

“Four Thirds Creative will provide an overview of the post-production process at the end of the camp and is charged with editing the participants’ hard work into a documentary,” said Karen Ryan, Post Master General at Four Thirds Creative. “The final piece will be shown at the Lone Star Film Festival in November.”

The camp will be held at Wings of Hope Equitherapy in Cleburne, Texas.

“One of the founders of Wings of Hope, Margaret Dickens, is a Museum Hall of Fame Honoree,” said Vela. “We honored her due to her non-profit work with equitherapy – at a time when very few were doing it. We wanted to highlight the incredible work of Wings of Hope while also allowing the girls an opportunity to learn filmmaking skills.”

“Our mission is so out of the ordinary, and we live outside of the box, so this was a perfect fit for our organization,” said Allison L. Gross, Development Director for Wings of Hope. “Our goal is to best serve individuals with disabilities and challenges through the partnership of a horse, so any time we can collaborate and stretch that service it allows us to enhance our mission.”

Four Thirds brought MPS on as a sponsor, and MPS’s own Executive Vice President, Meredith Stephens, will be volunteering both days of the camp to mentor the girls. “It’s exciting that MPS gets to be a part of the inaugural year of the Cowgirls with Cameras camp, and we hope the collaboration will continue for years to come.”

“Once we complete this camp, we will evaluate it and hopefully begin planning for 2019,” said Mathews. “Depending on the success of this year, expansion is definitely something we are very interested in exploring.”

MPS is honored to be a part of this community rising together, working in tandem to support and promote area organizations and the growth of the next generation of filmmakers.